Is One Wheel Better than Two? The Latest One Wheel Electric Scooters Say Yes! 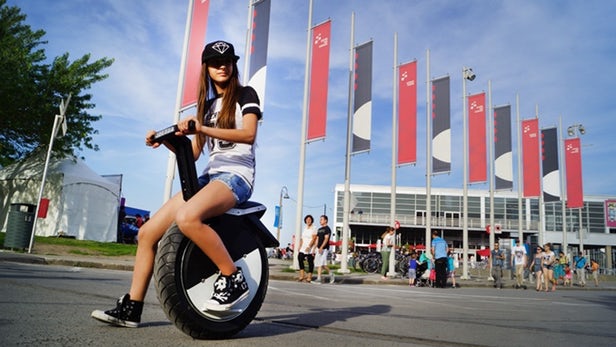 If you’ve been looking to purchase an electric personal transportation device you have no shortage of options such as hoverboards or electric Unicycles. Even scooters have made the jump from kid’s toy to a viable means of getting around.

There is, however, a lesser-known variation on the scooter that combines features from all three devices listed—the electric one wheel scooter.

You may think that is nothing more than just a fancier way to say unicycle. While on the surface that makes sense, the single wheel scooter is a lot more dynamic than many realize.

From Kid’s Toy to Viable Transportation

For much of their existence, scooters were aimed mainly at children. After school jaunts up and down the driveway or weekend adventures across neighborhood sidewalks, the stick stuck in a skateboard was a hit with kids across the country. 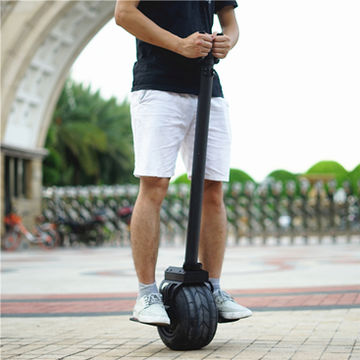 Though wildly successful, the two-wheeled toy never made it far beyond this specific demographic. Even when the scooter went electric, it still possessed the same limitations that kept it from competing with trendier and more robust devices.

Small, with a limited weight capacity, and a sometimes “barely there” framework, the electric two-wheelers offered minimal appeal for adults. Jump forward a few years, however, and it’s amazing what losing a wheel can do.

By taking the opposite approach of most conventional thinking, the electric scooter has found new life and a new market.

The Anatomy of a One-Wheeled Scooter

Although scooters and hoverboards both fall within the same overall segment of electric rideables, the wheels may be the only standard trait they share. The defining line between the battery-powered scooter and hoverboards and even electric unicycles and skateboards is the handlebars and seat.

That status quo has remained for some time. Now new segments are wedging their way in and crowding the field even more. There are two additional variations of scooter that are competing with the mainstays of old.

One of these, the RYNO Motors electric scooter carries with it a seat for an actual sit-down ride experience. The other option will most remind people of a traditional scooter, the Kiwano electric rideable.

The natural difference between the two is the setup. Deciding which one may be right for you ultimately will come down to the riding experience you are most looking for. Let’s break down both choices to see what’s behind the change and if either will be your next personal electric scooter.

Also referred to at times as a micro-cycle, this single wheel is a beefed up scooter for the serious rider. Although it can top speeds of 25 mph, the scooter is typically regulated to a more modest 10 mph to 12 mph. That doesn’t make it any less impressive.

Much like the ubiquitous Segway, the RYNO only requires the subtle lean of a human to move forward and backward. The RYNO however also possesses self-balance technology that allows a person to remain upright even if they tip a bit off-center.

Other features and capabilities include a 15-mile range on six-hour charge time and the ability to handle slopes and grades around 30 percent, which makes it useful for a lot of varied shifts in terrain.

However, the most recognizable characteristic on this one-wheeled self-balancing scooter is the tire. The full-size motorcycle tire allows the RYNO to carry loads upwards of 260lbs, far greater than the max 200 lb load of most 2-wheeled versions.

Other features include adjustable handlebars and seat, a shock absorption design, and an LED headlight. A lot of thought went into to trying to capture an exciting and comfortable ride.

The broader multi-use market this opens up for the RYNO is clear. Aside from the obvious cost-saving trips to and from the office, the additional capacity also means that stopping at the grocery store for few staples on the way home is a practical option.

Though it may not be for everyone, the RYNO Motors one wheel electric scooter is definitely in play for the riders that are the adventurous type, but still want to maintain some practicality about their transportation.

One Wheeled Electric Scooter by Kiwano 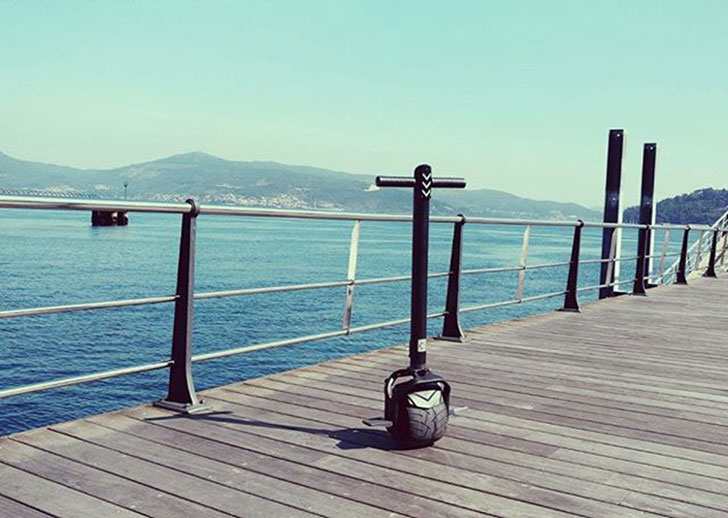 Speaking of adventurous, at the opposite end of the one wheel scooter segment is Kiwano’s handheld one wheel electric scooter. A more traditional design than the RYNO, the Kiwano still possesses a unique repackaging of what most of us consider a scooter.

Closely resembling a pogo stick on a wheel, the Kiwano does boast an impressive array of physical and technical specs that pack a lot of power inside its small stature.

Matching the RYNO in both trip range (15 miles) and incline handling (30 to 35 percent), it surprisingly exceeds the micro-cycle in usable speed, clocking in at an impressive top speed of 15 mph.

More than just speed and power though, this one-wheeled scooter can carry its weight and then some. What may be an industry high for electric personal transportation devices, the Kiwano can carry a maximum load of 550 lbs. A smooth suspension ensures that the higher totals receive just as comfortable of a ride as the lighter weights.

Impressive for a device that weighs only 35 lbs and can reach a full charge in less than three hours.

One thing we wanted to highlight in particular for both transporters is the technology. A long way removed from the first non-powered kickstart scooters, both the RYNO and the Kiwano posses a lot of gadgetry to make even the biggest tech-head happy.

For the RYNO, this manifests itself with the digital, backlit display. Showing battery charge, system status, and other vital figures on your ride, you can also plug in a smartphone for charging when necessary.

Even though it has a sharp LCD screen containing all of the normal performance details, with the Kiwano, it’s all about the app. Re-calibration settings, route tracking, and a digital lock, the Kiwano has one of the most feature-rich apps of any personal electric ride.

To top it off, the Kiwano even has a follow-me option, which allows it to roll next to you when you’re not riding, but still need it as a tag along.

Versus Other Electric Personal Transportation Devices

Before the smart design change down to a single wheel, motorized scooters most often compared to hoverboards and electric skateboards. Usually, the comparison fell more in favor of these two options.

The skateboard had a pre-existing element of cool thanks in part to the culture surrounding its non-powered sibling.

The hoverboard carried name recognition that dated back to 1989 and the movie Back to the Future II. While not exactly the hoverboard depicted in the film, the name nonetheless conjured up nostalgic images. People flocked to the new board looking for a piece of the past and the future.

Now though, as personal rideables mature, consumer interest is shifting. Demand for devices that not only provide an element of fun but also can be a viable mode of transportation is increasing.

Particularly in urban environments where young professionals can hit their path to work with a forward-thinking statement, charge it up during the day, and have the juice to get back home.

With the recent advancements, the new breed of scooters finds themselves in direct competition with another personal electric vehicle—the electric unicycle.

Also carrying with it a high element of cool, the electric unicycle is a city commuter’s dream. It’s small, portable, and can make quick work of city streets and sidewalks.

Versus our two featured scooters above, a vast majority of the electric unicycles have an advantage when it comes to speed and distance with some netting out above a 20mph speed and a 30-mile range on a single charge.

While impressive, those numbers are a bit misleading when you consider the unicycle will be carrying a weightier load than when achieving those figures.

Not to be outdone, the scooters do allow a smarter, safer ride in which the handles provide an element of stability and the devices overall rely less on a person’s skill to stay perfectly upright.

Oddly enough, what once was an apparent weakness for the scooter is growing into a marked advantage.

The stigma of being a limited toy for a limited age group held firm for many years. Plus, with the growth of other competing electric devices, it was hard to see the scooter ever breaking the previously set mold. But innovation is changing that perception.

As fun and unique as a hoverboard may be, until it actually floats in the air it will always be bound by its two wheels.

For a unicycle, it is much the same story. Speeds and distance may continue to increase, but there is a natural ceiling to the device that will be hard to break through.

But as we’ve demonstrated, there are two highly unique and distinctive options now populating the electric scooter segment. And both have moved the technology and capabilities of electronic transportation devices forward by leaps and bounds.

Regardless of your tastes, and the type of ride you are seeking, the continued and varied growth of electric scooters is a promising sign.

Whether it’s the motorcycle influenced RYNO micro-cycle with its fat, single tire and futuristic look or the simple, yet fully realized, and tech-heavy Kiwano, there’s little doubt the right ride is out there waiting for you.