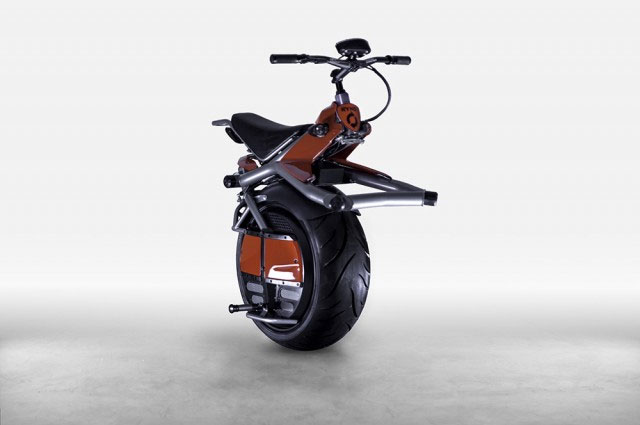 It’s clear that the inspiration for a one-wheeled motorcycle is the unicycle. Though it isn’t an efficient means of transportation, the unicycle has fascinated people for decades because of how difficult it is to ride, and how weird you look when you’re riding it!

Unicycles do have one advantage over traditional two-wheeled bikes, though—size. Unicycles are smaller and lighter, making them easy to fit through tight spaces.

As younger generations migrate back towards large cities, they’re looking for easier ways to get around. Cars can be impractical because of heavy traffic and inadequate parking, public transportation can be unreliable and dangerous, and walking a long distance isn’t always possible for people with disabilities or who live in harsher climates.

Bicycles, both manual and motorized, have filled that transportation niche for a long time. The issue of size keeps coming up though. What if you live in a small apartment? What if there aren’t any bike lanes, and you need to ride on the sidewalk? What if your office doesn’t have a bike rack, but your bike won’t fit on the elevator?

These practical issues are the primary drive behind the invention of one-wheel motorcycles. The other motivation? They look really cool.

What is a One-Wheel Motorcycle? 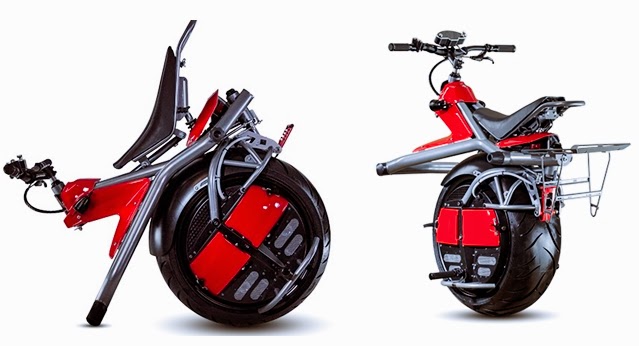 The obvious difference between a unicycle and a one-wheeled motorcycle is the motor. One-wheel motorcycles use electricity rather than gas, which distinguishes them from traditional models even more than their lack of a second wheel.

They stabilize the ‘cycle and keep it from tipping over. Various online videos showcase how deceptively easy it is to pilot a one-wheel motorcycle, no matter how far you lean in either direction.

Legend has it that the designer and CEO Chris Hoffman found inspiration in a sketch his daughter drew of a vehicle from a Dragon Ball video game. The finished product is remarkably similar to the drawing—sleek, high-tech and, for lack of a better term, badass.

Another interesting thing about RYNO is that, in addition to selling their motorcycles, they also license the blueprints to manufacturers, allowing their market share to grow without needing to invest in their own supply chain infrastructure.

There are a handful of companies that have used RYNO’s design as inspiration for their one-wheel motorcycles, and even more that seem to have copied RYNO entirely. Though these products look the same and are significantly less expensive, we’ve yet to find evidence that they’re comparable regarding quality and safety.

A slightly different type of one-wheel ‘cycle is the Moto Pogo. In truth, the Moto Pogo is more like a Segway clone—an electric scooter that’s powered by leaning in the direction you wish to move. It kind of looks like a stationary exercise bike that they’ve removed from its stand, with solid wheels and a long neck.

Even if it doesn’t look as cool, the Moto Pogo does have some advantages over the RYNO. First, it’s less than half the price, making it more accessible to the everyday consumer. It’s also safer since it is self-powered rather than powered by a motor. Even so, the Moto Pogo has a much higher top speed than the RYNO—25 miles per hour, versus RYNO’s governed speed of 10 miles per hour.

The last major competitor of RYNO is the Uno Bolt. The Uno Bolt markets itself as an “E-Unicycle,” rather than a one-wheel motorcycle, and it’s self-powered like the Moto Pogo. It has a much more beautiful design than the Moto Pogo, however, with a look that was apparently inspired by vintage bicycles like Schwinns.

Pricing starts at around $1,000 on the Uno Bolt website, making it the least expensive option of the three models.

Why Use a One-Wheeled Motorcycle?

Aside from the novelty value, you may be wondering why anyone would choose to use a one-wheel motorcycle. They certainly garner a lot of attention, both positive and negative. However, there are many practical purposes for riding a one-wheel ‘cycle.

Back in 2001, the inventor of a self-powered, two-wheeled, standing scooter introduced it as the next revolution in urban transportation. The Segway was supposed to change the way we travel through cities and in large buildings. However, the Segway failed to take off like they were expecting, for several reasons—their size, the lack of suitable infrastructure, low public opinion, etc.

One-wheel motorcycle producers believe they’ve solved all these problems with their ‘cycles, essentially fulfilling the promises made by their two-wheeled predecessor.

Let’s say you live and work in a major city like New York. Your apartment is eight blocks away from your office, which is in a high-rise building. Because of traffic and a lack of parking, you don’t own a car.

It’s summertime, so an eight-block walk ensures you’ll be soaked in sweat by the time you get there, either ruining your outfit or necessitating a shower and change of clothes when you arrive. The distance is too short to justify taking a cab or a bus, though. So, what are your options?

If you take a bike, you’ll still end up sweating, and you’ll have a hard time riding unless you bring a change of shoes with you. Plus, you’re worried a bike won’t fit in the elevator, and there aren’t any bike racks outside your building. A Segway is way too large to navigate the crowded sidewalks, won’t fit through the narrow doors inside the building and is very heavy to carry.

This fictional version of you is the perfect use case for a one-wheeled motorcycle. It’s both narrower than a Segway and shorter than a bike, making it easier to squeeze through tight spaces on sidewalks and in bike lanes.

Once you’re indoors, the Moto Pogo and Uno Bolt are light enough that you can carry them into your office, while the RYNO is still too heavy. Luckily, the RYNO is so low-profile that you can comfortably fit it between your legs as you ride the elevator and walk through the halls.

Even if your situation doesn’t match this hypothetical use case, you may find that a one-wheel motorcycle is a perfect solution to your transportation needs.

What are the Details? 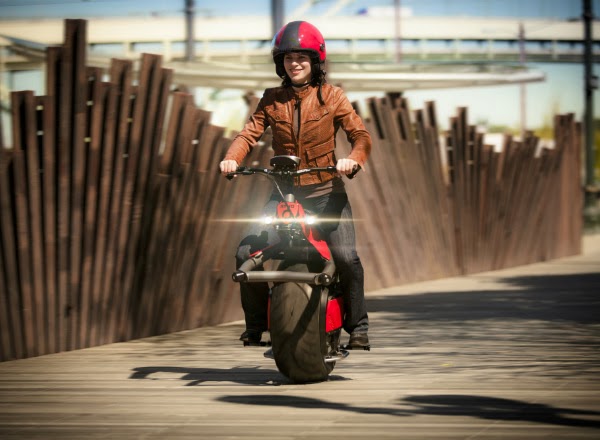 Below are the technical specifications for each of the top three one-wheel motorcycle models. We evaluated features such as the size, weight, battery life, speed, carrying capacity, and range, and have ranked each cycle accordingly. We also factored the price and availability into our ratings, to give you a complete picture.

It’s available for purchase online on the Uno Bolt website.

It’s available for purchase online on the Moto Pogo website.

It’s currently unavailable for purchase. Also, the next release date keeps getting pushed back.

Of all the models available, the Uno Bolt shows the most promise. Its low price, small size, and impressive tech specs make it stand out from the rest. The Moto Pogo is a compromise between an electric motorcycle and a scooter, sacrificing style for comfort.

The RYNO one-wheel motorcycle is by far the most aesthetically pleasing model and has the most bells and whistles, but its core specifications are lacking when compared to the other two, and it’s currently unavailable.

One-wheeled electric motorcycles are definitely appealing on multiple levels. Not only a novelty item, but one-wheel ‘cycles are also more convenient than Segways or motorbikes, and less physically demanding than a bicycle.

Could a one-wheeled motorcycle be the ideal vehicle for you? Learn more by visiting the manufacturers’ websites below.