What You Should Know About the Chevrolet Bolt EV

What You Should Know About the Chevrolet Bolt EV

There are many auto manufacturers with vehicles on the market, but only a handful of them can say they’ve achieved true success.

What does this mean? For the sake of this review, it means mastery of their industry across multiple markets. For example, in the automotive industry, Chevrolet has succeeded in many areas.

Whether it is their iconic pickup trucks great for rugged off-roading or their luxury cars perfect for your work commute, they’ve got a good mind for design. They’re committed to excellence, but also versatile in their approach. This versatility helps them try out new things with greater success.

One of the newest and most important trends in the auto industry is the introduction of electric powertrains. Cutting back on gas fumes is important for the environment – plus there’s a wealth of savings available for anyone who gets a reliable electric vehicle.

Chevrolet has also entered this market. The Chevrolet Bolt EV has generated a lot of excitement since its initial announcement.

But what exactly should you know about this vehicle before you consider buying it? How reliable is it? What are the specs? And how does it stack up to the competition?

What Does the Chevrolet Bolt EV Offer? Electric Affordability

There’s a lot of electric vehicle concepts floating around out there – some can be made to order and others are available only in a singular configuration.

The Bolt EV is Chevrolet’s main electric car – it’s advertised as being one of the first all-electric cars to hit the market with an affordable price tag. With a regular price of under $40,000 and even less after applicable credits, the Bolt costs no more than most new gas-guzzlers.

But the vehicle’s real claim to fame lies in its EPA-estimated mileage. It offers up to 238-miles per charge, thus offering one of the most cost-efficient options on the market. That’s enough battery power to handle most peoples’ regular commute to and from work multiple times. It may even be enough for your next vacation destination.

But beyond just looking for charging stations via the Chevrolet app, what else will you have to think about when it comes to owning a Bolt EV? Let’s take a look at how this vehicle fares in several different categories – including looks, features, and overall cost-efficiency.

It should be noted that for the sake of this review, we’re rating the vehicle on how it stacks up to Chevy’s other models in terms of looks and function. This can help longtime Chevy fans decide whether it is wise to go electric, and even give fans of Tesla or other competitors a chance to see what the Bolt EV can offer that the competition doesn’t.

Compact, Sleek, and Athletic Design Both In and Out 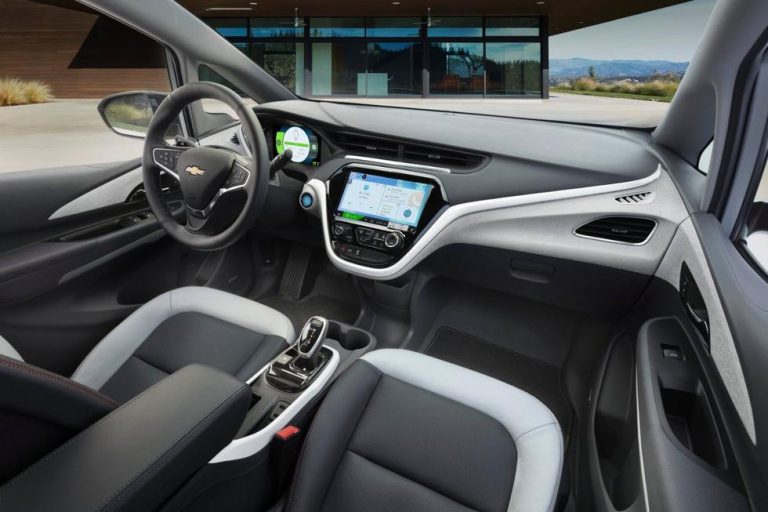 One look at the Bolt EV brings to mind the best of Chevrolet’s compact line. Their catalog may be full of big bulky trucks, but they’re no stranger to being on the lighter side of things.

Their compact bolt looks a bit like an SUV, but with substantially less girth. It is also easy to see they were going for a sleek design with this one – it has enough room to bring some passengers and a little cargo along for the trip. But it isn’t so bulky that it puts the electric components in too strenuous of an environment.

It is important to note that many of the early electric cars from popular manufacturers have smaller weight and reduced size. That is to say, a company may be more inclined to work on sportscars or compacts rather than fully sized SUVs or trucks. This gives less size and weight for the electric engine to pull, maximizing performance.

As for how the interior looks, the seats fold down for more cargo room – a total of 56.6 cubic feet are available in total. There’s even a false floor to provide additional space for neatly organizing cargo.

Let’s also take a look at the interior features – while they don’t offer much in terms of looks, they have a massive impact on how comfortable it is to take a trip in a Bolt EV. This five-seater offers a driver information center with classic and modern modes to help drivers keep track of all their important information.

The display screen looks a lot like a tablet, and makes it easy to find information and make adjustments. Control the climate, sound system, and driver safety features to make the trip safe and enjoyable for everyone on board.

And while not all driver assistance techs are created equal, there is a lot to be said for the ones offered with the Bolt EV. Using ultrasonic sensors and radar technology combined with perimeter cameras, this vehicle is designed to detect nearby threats while stationary or in motion.

But even beyond the advanced auto-detection capabilities meant to help drivers avoid obstacles, there are a number of helpful “classic” safety options included. These include an advanced strength steel frame, 10 airbags, and OneStar Safety response.

But how does the Chevrolet Bolt EV hold up in terms of cost-efficiency? Are the electric specs up to par, and can they truly safe drivers more money than a gas-powered car in the long run?

The buzz around the Chevrolet Bolt EV come from its smart design. But that doesn’t just mean technologies that assist you – it means a combination of features built around cost- and energy-efficiency.

The powerful battery is a lithium-ion variant with rich nickel material. If the specs seem familiar to longtime Chevy fans, that’s because they have a good memory – it’s modeled in part after the success of the Chevrolet Volt.

That model has been used on over 127,000 vehicles so far, and offers impressive coverage. For the first eight years or the first 100,000 miles, Chevrolet Complete Care will cover it. The company has a lot of faith in their product, and they want consumers to feel the same. What better way to reinforce that than with a warranty?

Combined with a network of chargers on the road and also the option of a home charging system, the Chevrolet Bolt EV is a powerful vehicle that is built to be convenient. Prospective buyers who have never gone electric before may be curious but skeptical. Chevrolet gets this and tries to address it.

Did we mention that the vehicle has a perfect five-star score on the 2018 NHTSA safety scale? While it is easy to assume models with less-prominent engine types are less safe, that isn’t the case here.

Should Non-Chevy Fans Try Out the Bolt?

Obviously, the Bolt EV is an interesting concept to anyone who is a longtime fan of Chevy. For some people, their hardcore brand loyalty is a way of life. Particularly in the truck market, contests like Ford vs. Chevy have raged on for decades.

Those same brand loyalists may still look to Chevy if they want to try going electric. It is obvious that for these people, the Bolt EV is one of the best options on the market. The combinations of the name and the features this car offers makes it a great choice. But what about for people who aren’t Chevy fans?

There is plenty of competition on the market. The Chevrolet Bolt EV is just one in a mix of several interesting electric options. From the Tesla X to the Audi e-tron, there are a few choices when you’re making the jump to a cleaner car. Which should you choose?

Obviously, the buying process comes down largely to subjective preference. And for those who have never driven a Chevrolet and are unsure about how they view the brand as a whole, it may be better to shop around a little first.

But for those who swear by Chevrolet and know what they like, the Bolt won’t disappoint. With its range and price, it is cost-efficient and reliable. That makes it a great choice regardless of the name attached to it.

Final Verdict: Is the Bolt EV Poised to Change the Electric Market?

There’s no denying that Chevrolet is a big force in the electric car market already. As more competitors enter and the race becomes more intense, the Bolt EV gives Chevy a secure lead over most of their competitors.

Sure, there are still eyes on companies like Tesla and Audi to see what they’ll offer and how their vehicles stack up to their respective price tags. But the Bolt EV has everything a driver could want – sleek looks, smart features, and an electric powertrain you can rely on.

The Bolt EV has set records with its mileage range and affordability, and it could potentially set sales records as time goes on.